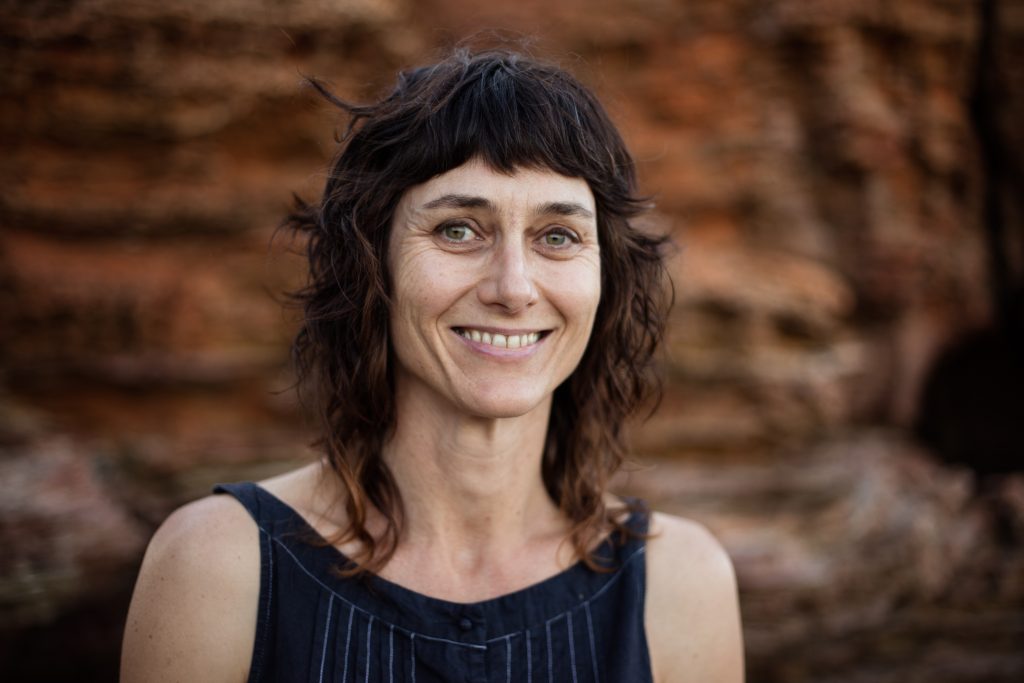 Rachael Swain was born in Aotearoa/New Zealand of settler descent and lives and works between the land of the Gadigal in Sydney and the land of the Yawuru in Broome. She is a director of intercultural dance theatre and a performance researcher. She is one of the founding members and a Co-Artistic Director of Marrugeku, together with Yawuru dancer and choreographer Dalisa Pigram. Rachael specialises in creating platforms for Indigenous and intercultural choreographies and dramaturgies in dance and in facilitating intercultural and trans-indigenous practice-led research projects to redefine contemporary arts practices. She has directed Marrugeku’s productions Mimi (1996), Crying Baby (2000), Burning Daylight (2006), Cut the Sky (2015) and the forthcoming Jurrungu Ngan-ga (2020). She co-directed Buru (2010) and Ngarlimbah (2018) with Dalisa Pigram. She was dramaturg for Dalisa Pigram’s award-winning solo Gudirr Gudirr (2013), the triple bill Burrbgaja Yalirra (2018) and Marrugeku’s Australian-New Caledonian co-production Le Dernier Appel (2018), directed by Serge Aimé Coulibaly. Together with Dalisa Pigram she has curated and facilitated Marrugeku’s series of Intercultural Indigenous Choreographic Laboratories in Sydney, Broome, Auckland, and Nouméa.

Rachael was a founding member and Co-Artistic Director of Stalker Theatre from 1989 to 2014. During her time with Stalker she pioneered challenging new approaches to Australian physical theatre, drawing on dance and multimedia practices. Rachael co-devised and performed in each of Stalker’s early ground breaking productions, touring extensively throughout Australia, Europe, Asia and Latin America from 1989 to 1995. In 1995 Rachael began directing Stalker’s large-scale, interdisciplinary dance theatre productions including Blood Vessel (1998) commissioned by Perth Festival and Adelaide Festival, Incognita (2003) commissioned by Sydney Festival, Perth Festival and Melbourne Festival, Sugar (2007) commissioned by the European Capital of Culture, Liverpool 2008 and Shanghai Lady Killer (2010) commissioned by Brisbane Festival and Melbourne Festival.

Rachael trained at the European Dance Development Centre in Arnhem, the Netherlands. She has an MA in Performance Studies from Sydney University, and an MA in Advanced Theatre and Dance Research from DAS ARTS Amsterdam. Her PhD from Melbourne University was titled Ways of Listening—new intercultural dramaturgies. She held an ARC DECRA research fellowship at Melbourne University from 2013–2016. Her first monograph Dance and Contested Land—new intercultural dramaturgies, will be published by Palgrave Macmillan in 2019.